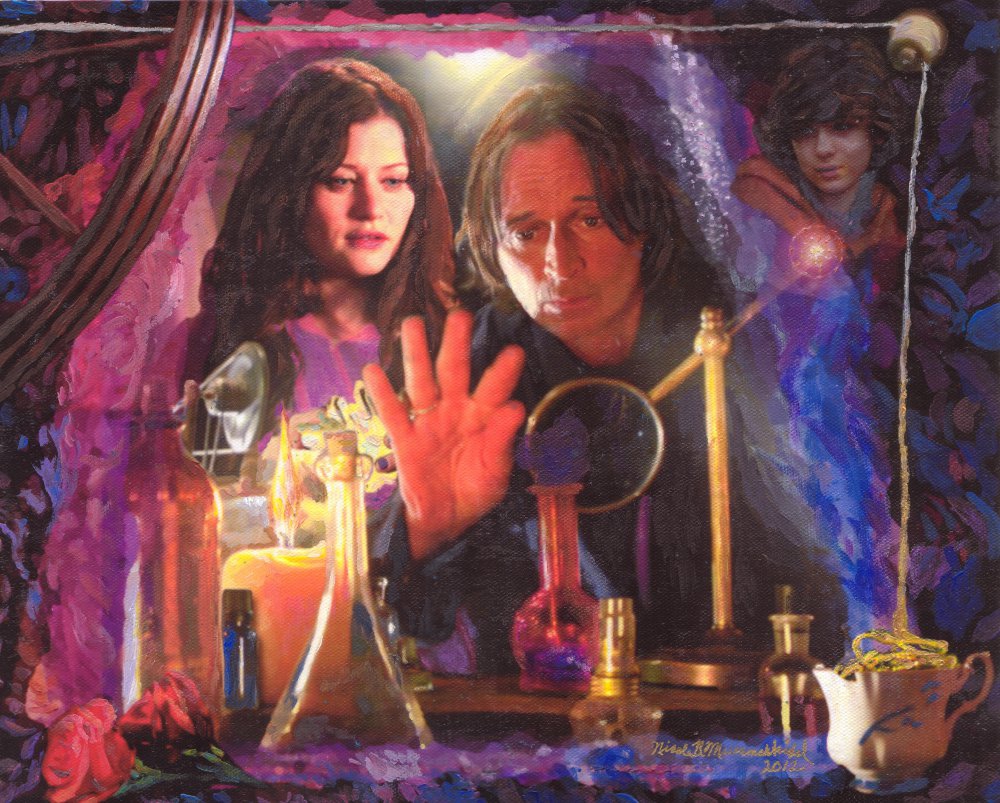 “Collaboration of Love”
This is a scan of an acrylic and ink multimedia art piece that I made for an upcoming charity auction, Dec. 8th-15th, being put on by Pamela Anneliese Parker’s Facebook group “Once Upon A Time… Fan Community” to raise funds for With Kids, a children’s charity for which Robert Carlyle is ambassador. Details to follow.
*I do not own the rights to these characters.

The very long day started as a routine day for patient number 682303. As routine as it could be for someone secretly locked in a mental ward for almost twenty-nine years, as part of Evil Queen Regina’s power play. Patient number 682303 had finished her dinner. She was sick, bored and regretting her hasty decision from the previous day. She felt an unnamed emptiness in her spirit, as she had for nearly twenty-nine years. She used the handle of the spoon and left over beet juice to doodle on a napkin. Once finished, she tucked it in her sleeve, hoping it wouldn’t be taken from her. It always seemed like things were being taken from her. Laying on her cot, the door opened, and everything changed. An orderly named, Jefferson, entered her room told her to find Mr. Gold, whoever that was, and tell him that Regina had locked her up. Wearing hospital clothing and a tweed coat ‘borrowed’ from the unconscious head nurse in the mental ward of Storybrooke Hospital, 682303 was escorted by Jefferson out of the hospital and directed to Mr. Gold’s shop. The shop appeared closed, but the door was unlocked, thus she ventured to the back room, where a man in a dark suit was standing with his back to her. 682303 asked, “Are you Mr. Gold?” The man with a Scottish brogue started to speak before facing her. He seemed intent upon giving her the bum’s rush out the door, until he saw her face. 682303′s day became more strange, as the man gawked at her as though she were a ghost. She managed to do as instructed by Jefferson, asking for protection from Regina. To her confusion and shock, the man, with the flowing dark hair and dark eyes, looked at her with unabashed love and hugged her in a manner that was unlike any embrace that she could remember. They left the store, got into his black Cadillac car, drove to a wooded area and walked into the forest and up the mountain. 682303 was very unsure as to what they were doing, but she obediently followed.

As they approached a peak, a wave of light flowed through the forest. With that flow of light, everything that she knew changed. The emptiness that she had felt had a name, Rumpelstiltskin It was him! It had to be. He looked different since her time at the castle, but it was definitely him, and her name was Belle. Their last words at the castle were words of hurt and anger, after Belle made the biggest mistake of her life, taking the advice of a seemingly kind stranger, Regina. Yet Rumpelstiltskin had embraced her with such love at the shop, perhaps he had forgiven her transgression. Belle’s love for Rumpelstiltskin seemed to be trying to burst out of her every pore. She declared her love for him, and to her delight and astonishment he reciprocated with a declaration of love. Belle’s dreams were finally coming true. Then Rumpelstiltskin said, “There’ll be time for that later. There’ll be time for everything. But first there’s something I must do.” He poured True Love’s Potion into the old wishing well. Purple mist appeared, and as was typical in life with Rumpelstiltskin, uncertainty reigned supreme.

Unlocking his study, Rumpelstiltskin enters and walks to a small oak wall cabinet with brass handles. Opening the cabinet, he retrieves five potion bottles. Two of them had been prepared early that morning, in anticipation of magic returning and the plans they would help him fulfill. The other three bottles are empty.

Emma becomes lost in thought about Marissa. Marissa was a year younger than Emma. She had long flaming red hair, freckles and eyes that stayed with a person long after they stopped looking at her. Unlike Emma, she had a family life, friends and had excelled in school. She was the kind of girl that it would have been easy for Emma to hate, if Marissa weren’t so kind hearted. Marissa was never the type to cut class, until the day came when seeing a performance was too much for her to resist. Unlike others her age, who would have ditched class to get to Phoenix to see a rock concert, Marissa’s temptation was a one time performance of “La bohème”. She never made it to the opera, as she was busted for truancy. While this minor offense usually yielded a lecture from a judge and some public service hours, Marissa had the great misfortune of having Judge Hardwick Miller. Judge Miller and the owner of a nearby correctional facility had a cozy arrangement. Miller supplied occupants for the facility, the owner of the facility would get substantial payments from the state, then Miller would get a cut of the money. Eventually, both Miller and the correctional facility’s owner, would get cells of their own, but it was much too late for Marissa. Marissa’s sentence was one year in the correctional facility. Marissa, though terrified, was relieved to meet her room mate, Emma Swan. Marissa, the oldest of five children, had seen her mother through the last couple of pregnancies, and decided as long as she had to be there, she might as well help Emma, as much as she could. At meal times, anything that Marissa thought might be good for the baby, managed to travel from Marissa’s plate to Emma’s. After lights out, Marissa and Emma would talk, and Marissa, who had a pristine soprano voice, would softly sing songs, when she knew Emma was upset. Occasionally, Marissa would make her way to Emma’s cot and sing silly made up songs to the baby. Marissa’s paternal grandmother, who was from Poland, was known for many Yiddish words, and Marissa had a habit of using such words in everyday conversation. Marissa would often tell Emma that she would be fine having the baby, because Emma had “chutzpah”. Marissa had managed to bring into the facility a crystalline plastic horse necklace, which she gave to Emma, telling her that she could ride anywhere on a crystal horse. For the first time in Emma’s life, she had someone looking after her. That was the case for the first month of Marissa’s incarceration. Then came the day that the facility owner’s son, Brian X. Phillips III, got a job in the facility. It never should have happened that a man would have access to a women’s facility. It was one of many examples that Emma would see of people with too much power, abusing said power. Early on, Emma noticed him eyeing Marissa. She tried to stick close to Marissa, as much as possible, but then one day, Emma was ordered to the warden’s office to discuss plans for Emma’s unborn baby. After the meeting, Emma looked for Marissa with no luck. By meal time with no sign of Marissa, Emma was in a full scale panic, particularly after noticing the Brian, was grinning like the cat that ate the canary. She had checked everywhere that inmates were allowed to go, then she thought of the linen closet. There was Marissa, looking disheveled, with bruises on her wrists and a shattered look in her eyes. The next day at dinner, a scuffle broke out between two well known trouble makers, and in the course of events, a search for ‘contraband’ was conducted, and Marissa was found ‘holding’ something in her sweater pocket. Though she declared her innocence, Marissa was told she would have three days of solitary confinement. When Emma, sensing a frame up, tried to intervene, Marissa begged Emma to stop, because she didn’t want the baby to be harmed. Marissa, reasoned with Emma, that three days alone wouldn’t be too bad. Emma prayed that Marissa would be alone. When Emma saw Marissa again, she had a large bruise on her neck, more bruises on her wrists and arms, and was drugged into a stupor. When Emma questioned the guard about Marissa’s state, Emma was told that Marissa was a very disturbed girl, who needed to be medicated for her own safety and the safety of others.

They gave Marissa various pills and injections. Emma didn’t know what they all were, but one day, she saw the name of one of the meds; Haloperidol. The name stuck in Emma’s brain like a knife. Emma tried to get Marissa to talk to her, but she rarely spoke, and would disappear for long periods of time, only to return looking like more of a shell of the girl that Emma had known. The day before Henry was born, Emma was able to get Marissa to interact with her and the baby in her belly. Marissa sang one short, wobbly sounding tune to Henry. When Emma returned after giving birth to Henry, she had a new roommate. Emma was told that Marissa’s attorney had gotten an appeal, and Marissa went home. After Emma’s release, she nervously went to Marissa’s house, uncertain how Marissa’s family would react to Marissa’s ‘cell’ mate arriving on their door step to see their daughter. When Emma asked to see Marissa, her mother stared at Emma in disbelief, then finally forced out the words, “Marissa’s dead.” She had died in the correctional facility the day after Henry was born. From then on, Marissa’s memory fueled Emma’s rage at those who use power to abuse others.